Monthly Archives for May 2021

Learn where to stay in Eleuthera, Bahamas to have 1 of your best vacations 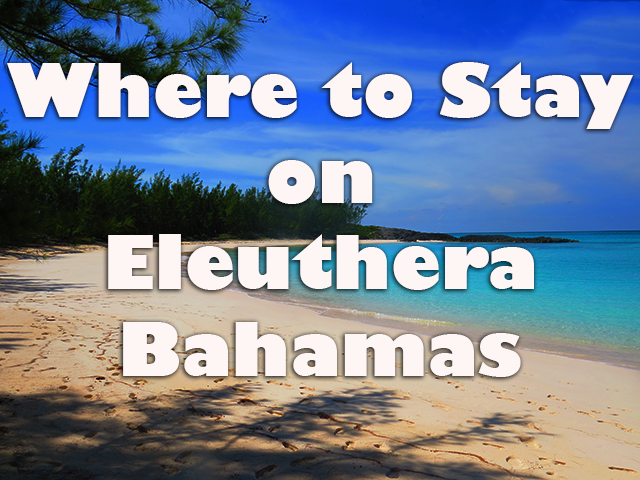 Not sure where to stay in Eleuthera, Bahamas? Let’s see if we can help you decide.

What makes Eleuthera a tricky place to choose what part of the island to stay on is because of its 100 mile length. There is a lot to see and do on Eleuthera and most first timers don’t want to miss a thing. Those of us who have been visiting for years know to take it slow because you can’t just cram it all in on one visit, but that doesn’t stop some folks from trying. Use this information to help you narrow down your selection.

You probably won’t choose where to stay solely based on what airport you are flying into to, but it might influence your choice. There are three airports on Eleuthera – North Eleuthera Airport (ELH) to the north, Governor’s Harbour (GHB) in the center, and Rock Sound (RSD) to the south. International flights from the US arrive from Fort Lauderdale (FLL), Miami (MIA), Atlanta (ATL) and Charlotte (CLT). The majority of those flights arrive into ELH with a few going into GHB. There are currently no commercial international flights into RSD.

Folks who fly into ELH tend to either stay on Harbour Island, one of the neighboring Family Islands that is reached by water taxi from the nearby Three Island Dock, Spanish Wells, another neighboring island, which is reached by water taxi from Gene’s Bay Dock, or the northern parts of Eleuthera. Within a half hour drive of ELH you have the settlements and communities of Current, Whale Point, Gaulding Cay, Gregory Town, Surfer’s Beach, Hatchet Bay, Rainbow Bay and James Cistern. This doesn’t mean you can’t fly into ELH and then drive to settlements that are south of James Cistern. It just means you are going to have a drive of an hour or more, which is certainly doable, but not necessarily how you want to start off your vacation after a long day of travel. 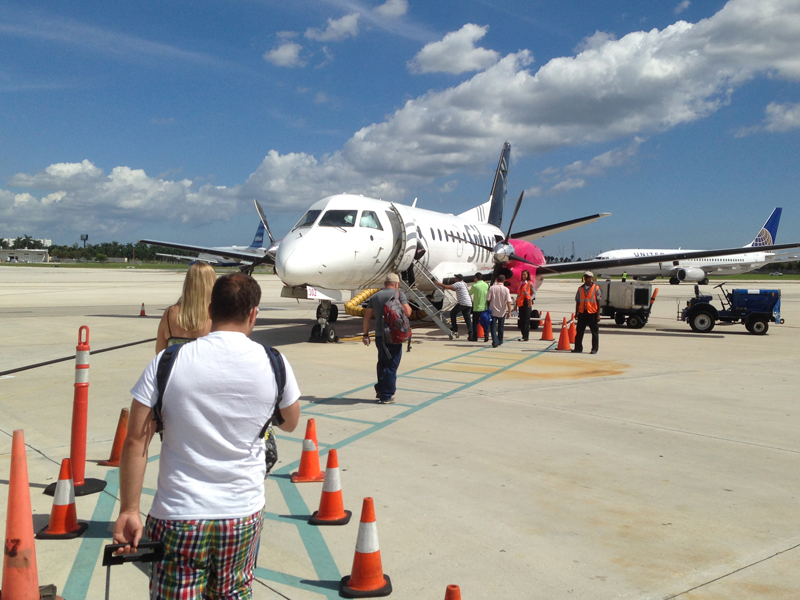 GHB usually costs a little more to fly into, but it’s central location makes it ideal to reach all parts of the island. Flights arrive daily from FLL and Nassau, Bahamas (NAS). In addition to easily reaching the northern settlements, almost every settlement is easily reached including the capital of Governor’s Harbour, Cupid’s Cay, North and South Palmetto Point, Double Bay, Ten Bay, Savannah Sound, Tarpum Bay, Winding Bay and Rock Sound. Click here for a list of settlements on the island and a map of their relative locations.

The bottom line is that any part of the island can be reached from any airport. It’s just a question of how far you are willing to drive in relation to the cost of your airline ticket and convenience of your travel itinerary. I generally try to fly into GHB since my vacation property is located in Ten Bay, but am often attracted by the prices into ELH. Be aware that many rental car businesses will charge a pickup and drop off fee of around $35 for each leg of the trip if you fly into an alternate airport than the one they primarily serve. Make sure to factor that into your overall cost comparison.

WHAT NOT TO MISS

I used to think of Eleuthera as this very laid back sleepy island without much to see or do other than visit the beautiful beaches and quaint settlements, but my opinion has changed considerably over the years as I’ve learned more and more about the island. Eleuthera has an adventurous side that attracts all sorts of thrill seekers. That might be what attracted me in the first place although I convinced myself it was the peace and solitude. Regardless of what your personal preference is you can find both laid back and adventurous here.

Want to have a new beautiful beach to yourself every day? Yup, got that! Want to scuba dive, surf, snorkel in a cenote, feed swimming pigs, go deep sea fishing, explore a bat cave or jump off a cliff? Yup, we got that, too! What we don’t have a lot of are some of the more artificial touristy type experiences that you might find in other beach destinations such as jet skis, parasailing, wind surfing, booze cruises, water parks or ATVs. Picture your Eleuthera vacation as the perfect beach / ocean vacation without the use of gas engines except for those found on the boats of the fishermen and adventure tour guides. Also, be aware that you won’t find casinos or much nightlife save for the weekly fish fry in Governor’s Harbour, which is currently suspended due to Covid.

So, how do vacation experiences relate to where to stay on Eleuthera? Let’s go back again to the first point in this article, namely, that Eleuthera is 100 miles long. Further consider that the max speed limit outside of the settlements is 45mph and 15mph within with oodles of speed bumps. If you don’t want to spend most of your vacation driving a couple of hours each day then you will favor one part of the island over another.

Visitors who choose the north do so generally because they want to sightsee. The majority of natural attractions and short off-island day trips are found north of Gregory Town. The northern attractions include the Glass Window Bridge, Queen’s Baths, Cow and Bull, The Cliffs, Sapphire Hole, Hatchet Bay Caves, Preacher’s Cave, Current Cut, Harbour Island, Spanish Wells, Surfer’s Beach, swimming pig tours, beach horseback riding and almost all of the cliff jumping. You can see by this list that if you stay on the northern end of the island you can easily spend your entire vacation just doing things in the north. If you want to experience parts of the central or southern regions of the island then you can easily visit those areas by treating them as day excursions. 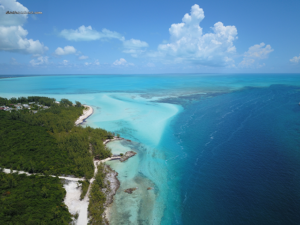 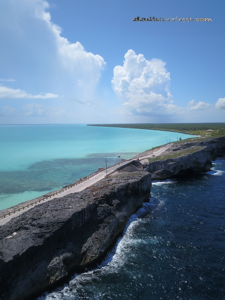 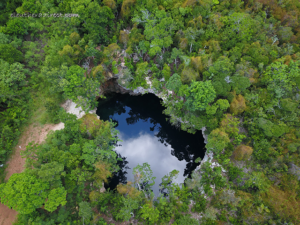 Choosing the center of the island, from Governor’s Harbour to Savannah Sound, gives you equal opportunity to see both ends of the island albeit with a little bit of driving. However, you won’t have the extremely long drives traversing one end of the island to the opposite end. For that reason it is usually more convenient to stay central.

The real benefit of staying central, though, is easy access to the majority of good restaurants on the island. Governor’s Harbour is known as the home of the weekly Friday night Fish Fry, but it also has the highest density of restaurants on the island that can be found in Governor’s Harbour itself, along the Bank’s Road that runs between Governor’s and North Palmetto Point, in Palmetto Point, and in Savannah Sound. Because driving at night can be a challenge, a lot of visitors choose to stay centrally so they can do their longer sightseeing drives during the day and then have much shorter drives to eating establishments after dark.

The central region also has a number of really excellent beaches, Hayne’s Library, the Leon Levy Native Plant Preserve, the island’s only movie theatre, The Globe Princess, and the Ten Bay Caves historical attraction, all found within 8 miles of the capital of Governor’s Harbour. 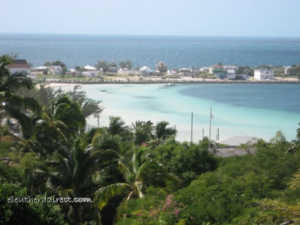 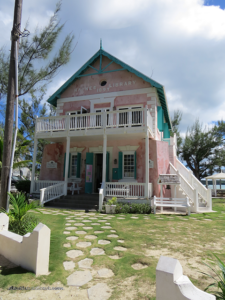 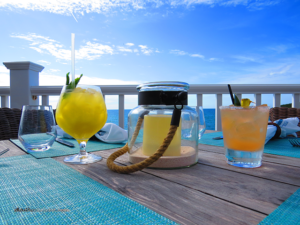 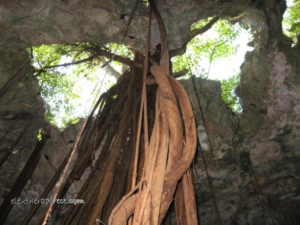 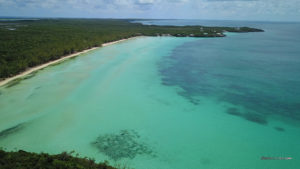 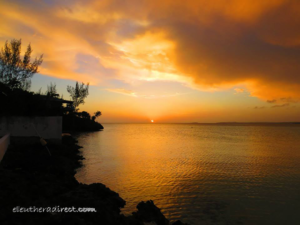 The main attraction in the south, and really on the whole island, is Lighthouse Beach. Arguably one of the most beautiful beaches in the world, visitors often travel several hours, including the final 3 miles of nerve wracking bumps and jostles along its rutted, pockmarked access road, just to see the glorious splendor that it offers. The views from the hillside overlooking its series of cays is breathtaking. Swimming through the channel where the Atlantic Ocean meets the Exuma Bight is simply exhilarating. There is no lodging anywhere near Lighthouse Beach, however. The nearest settlement with lodging is in Rock Sound, which is approximately 15 miles north of the Lighthouse. 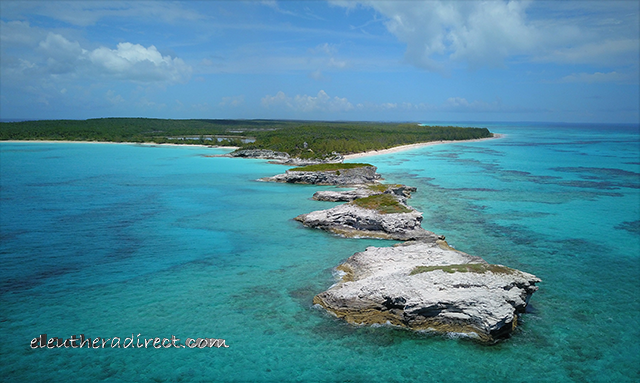 Lighthouse Beach is one of the major reasons to visit Eleuthera

Lighthouse Beach is usually only visited once on any given trip, but there are other reasons to stay in the southern settlements of Tarpum Bay, Rock Sound and Cape Eleuthera. The southern attractions include the Ocean Hole, Boiling Hole, Cathedral Caves, Deal Town ruins, Cape Eleuthera Institute, the Island School, Schooner Cays and really the best and only organized scuba diving on the island. There are several excellent restaurants in Rock Sound and along the waterfront in Tarpum Bay. The fishermen arrive daily in Tarpum Bay to sell their catch and there are several excellent conch stands there that make fresh conch salad to order.

Where to stay on Eleuthera, Bahamas

To summarize, your choice of where to stay really boils down to what you plan to see and do on your vacation and how much time you want to spend on the road getting there. Choose the northern region if you are going to be mostly visiting the northern attractions and don’t mind a long day trip to Lighthouse Beach. Choose the central region if you want the most convenient access to food choices and also want to visit attractions on both ends of the island. Choose the south to have the shortest distance to Lighthouse Beach along with long day trips to the northern attractions, Spanish Wells and Harbour Island.

Read about the best 15 Things to Do on Eleuthera! 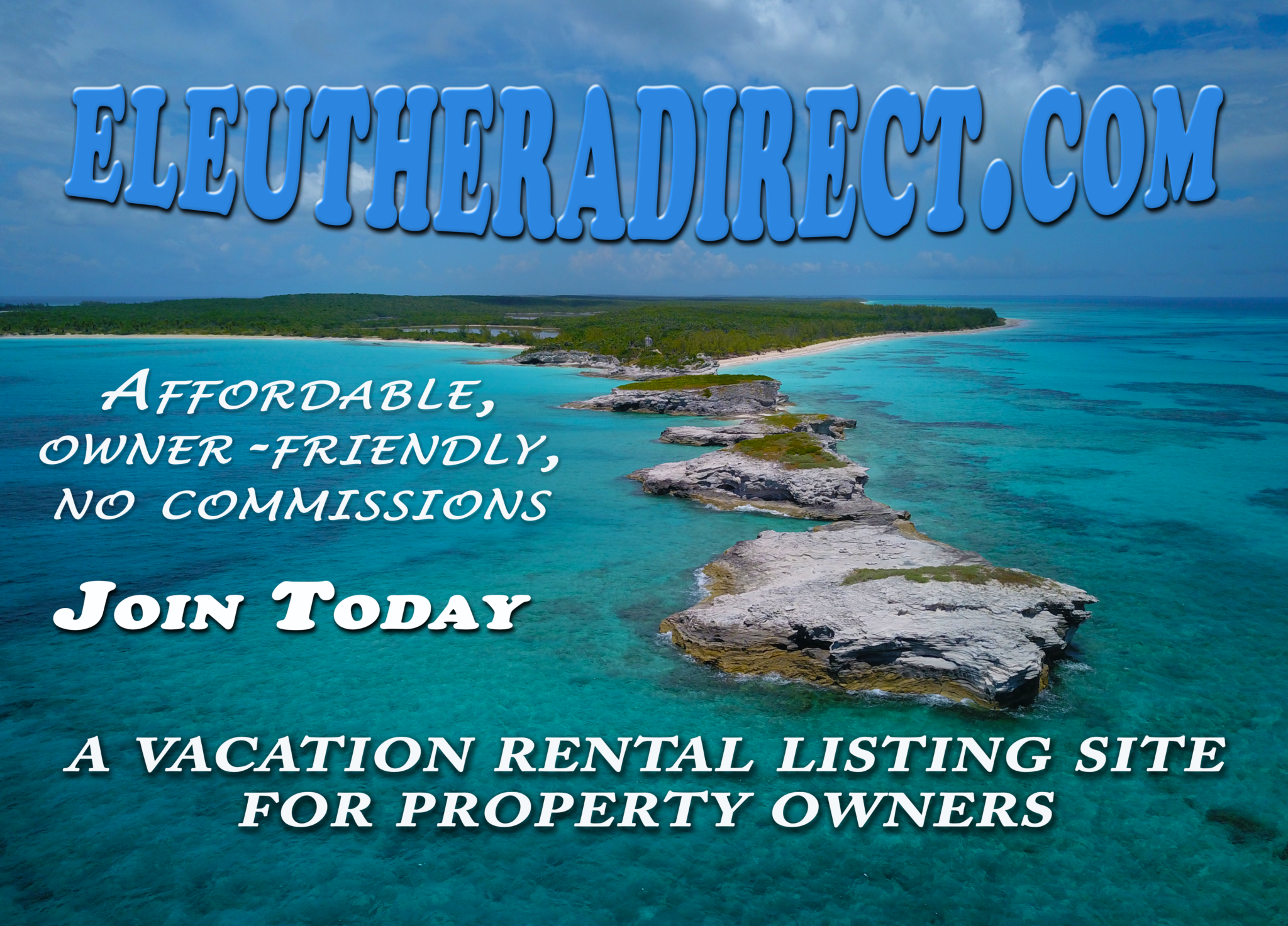