How to Get to Eleuthera | 3 Best Ways 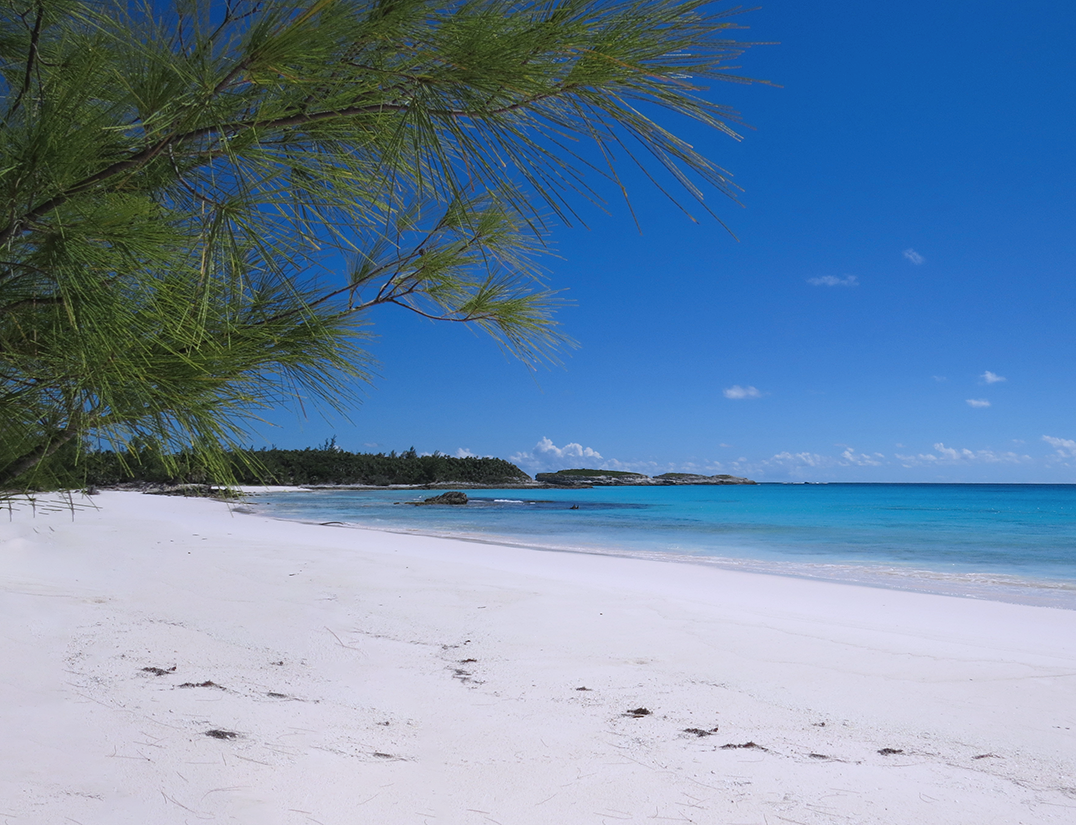 Do you want to know how to get to Eleuthera? The Family Islands may not be on everybody’s bucket list. They don’t have crowds, casinos, non-stop partying, golf or motorized watersports. What they do have is peace, quiet, friendly people, beautiful natural attractions and hundreds of miles of deserted beaches. Some Bahamian islands cater to the tourist crowds, but what makes this trio of neighboring islands so special is that all of that pomp is mostly non-existent. Instead, you’ll find quaint vacation rentals, nostalgic settlements, tropical jungle, old fashioned pineapple farms and miles of untouched beaches. Here’s how to get to Eleuthera.

Lighthouse Beach is on the of the island’s best beaches

The easiest way to reach Eleuthera is aboard a commercial plane. There are three airports on the island, North Eleuthera (ELH), which caters to the northern settlements plus Harbour Island and Spanish Wells, Governor’s Harbour (GHB) in the center of the island, and Rock Sound (RSD), which caters to southern settlements plus Cape Eleuthera. Non-stop flights from the United States are available from Charlotte, Atlanta, Miami and Fort Lauderdale. Direct flights into all three Eleuthera airports are also available via Lynden Pindling International Airport (NAS) in Nassau, Bahamas.

American Airlines flies direct from Charlotte (CLT) on a limited basis and more frequently from Miami (MIA). Delta flies via Atlanta (ATL). United, via it’s Silver Airways subsidiary, and Aztec Air both fly from Fort Lauderdale (FLL) although Aztec leaves from the smaller Fort Lauderdale Executive airport located at 5151 E. Perimeter Road. Most of the US based flights land in North Eleuthera, but you can find some flights into Governor’s Harbour.

Flying on one of the Bahamian owned carriers offers the most flight options into all three airports. Bahamas Air flies out of Fort Lauderdale with a connection in Nassau while Pineapple Air, Southern Air Charter and Bahamas Air all fly out of Nassau on a daily basis.

Regardless of where you leave from you have plenty of options to choose. Eleuthera is a little more than 250 miles from Florida, which makes it possible to fly there in just over an hour while Nassau is a short 30 minute hop.

Eleuthera is a long, narrow island that stretches over 100 miles from north to south although it is only 2 miles wide in most spots. The island’s settlements are up to 15 miles apart, which makes it important to consider which airport is the most convenient to where you are staying on the island. Fear not, though! If you find better airfares into an alternate airport then by all means choose that airport. It just means you might have a longer and more scenic drive to your vacation rental.

High speed ferry service is available between Nassau and Harbour Island, Spanish Wells and several locations on Eleuthera as well as several other islands in the Bahamas. While this choice seems carefree and romantic, it often proves to be very inconvenient due to scheduling, which does not line up very nicely with the arrival of flights from the US. Plus, there is no cost savings as the cost is equivalent to that of a flight. For those reasons, unless you are already vacationing on Nassau and wish to have an excursion to one of the Family Islands, there is very little reason to choose the ferry.

In days of yore, the mail boat, a large freighter that carried mail between islands, was an option for passengers, too. However, the mailboat no longer transports passengers to Eleuthera, Harbour Island or Spanish Wells.

To reach Harbour Island and Spanish Wells you must take a water taxi from mainland Eleuthera. This short boat ride takes about 5 minutes each way and costs approximatly $6 to $8 per passenger depending on where you are dropped off. The water taxi for Harbour Island can be found at Three Island Dock, which is 1 mile north of ELH. The water taxi for Spanish Wells departs from Gene’s Bay Dock, an 8 mile ride from ELH. The boats depart roughly every 15 to 30 minutes or when they fill up. Each boat can usually handle 10 to 15 passengers plus luggage. Reservations are not required. It’s simply first come, first served.

Private pilots have always had an advantage when traveling to Eleuthera. The convenience of being able to come and go as one pleases is incentive enough to get a pilot’s license. If one is lucky enough to have their own plane then flying into one of the airports is a breeze. You will need to follow the procedures outlined by the Bahamas Civil Aviation authority, which can be found here.

If you are traveling with 4 or more people then the cost and convenience of a private charter may well be worth it especially if you can make it to Nassau on a commercial flight.

Here are some private charter companies. Contact them individually to find out the size of their planes and the cost of the flights.

It is certainly possible to make the crossing from Florida or Nassau via boat if the conditions are right. There are some general rules that need to be followed to enter legally. There aren’t a lot of boat facilities on these islands so it’s important to plan properly. Dock, gas and/or repair services are limited especially on Eleuthera where Hatchet Bay, Governor’s Harbour, Davis Harbour and Cape Eleuthera are your options. Spanish Wells and Harbour Island cater to boaters and yachtsmen so offer a more complete set of services.

To operate in Bahamian waters, a cruising permit is required for all foreign, private, non-commercial pleasure boats and occupants. All visiting boaters must clear Customs and Immigration at the nearest designated Port of Entry. As you enter each port you must fly the yellow quarantine flag and notify Customs of your arrival. Only the captain is permitted to leave the boat until your vessel has been cleared. Customs and Immigration officials will come to your vessel. Everyone on board must have proof of citizenship. U.S. citizens must present a passport. Upon your arrival in the Bahamas, you will be asked to fill out an Immigration Arrival/Departure Card, which you will keep until your departure.

Boaters and sailors traveling to Eleuthera, Harbour Island or Spanish Wells can enter the country at numerous ports scattered throughout the islands. All boaters entering The Bahamas are required to pay an entry fee. Depending on the size of the boat and the duration of your stay that cost ranges from $300 to $2,000 annually.

Below is a list of docks and marinas on Harbour Island, Spanish Wells, and Eleuthera.

In Nassau, to speed up the process for those connecting to Family Islands flights, there is a line to the left of the main immigration line that can be used. It is much shorter and faster, and is often necessary to avoid missing your connecting flight. You will then go downstairs, collect your bags and clear customs. You will then need to walk to the domestic terminal, which is approximately 5 minutes away, to get your connecting flight. You will need to check in with the airline, check your bags and go through security screening. It’s important to allow enough time for all of that to happen and at least an hour and a half is suggested, especially if you are claiming and re-checking luggage.

If you arrive into Eleuthera from the US then you will follow the same process, but it will be a bit less chaotic because there will be fewer passengers. Be patient as it takes time to screen each arriving passenger and bag. If you have items that you are importing then please make sure to make note of them and bring receipts so that you can pay VAT and speed up your departure from the airport. Arriving passengers are allowed a $100 allowance on items that can be imported VAT free.

Getting around the island

As previously mentioned, Eleuthera is a long island and the settlements are miles apart. The roads have few dividing lines and street lights. They can often be in disrepair in places with large potholes making night time driving treacherous. Bahamians tend to drive fast and use their high beams constantly at night. It’s simply not safe to drive in anything other than a car or SUV. You can expect to pay anywhere from $65 to $90 per day for a vehicle rental. There are no Hertz or Avis rentals on the island. All of the rentals are handled by local businessmen who own a fleet of vehicle rentals that are usually older in age. They prefer to receive cash as payment although some have started to take credit cards.

Taxi service is  an option, but one way fares can often exceed the cost of renting a vehicle for the day. Also, be aware that the taxi drivers generally operate out of one of the airports. If you are relying on taxis to get around then you will have to pre-arrange all of your trips to make sure that your driver is available. Otherwise, prepare for a long wait.

On Harbour Island and Spanish Wells golf carts are the only method of transport for visitors and that’s half the fun of staying on those islands. The carts are equipped with lights and storage areas for luggage.  Rental rates are equivalent to a car rental on Eleuthera and are dependent on the size of the golf cart and how long you will be renting it for.

Just always remember to DRIVE ON THE LEFT whichever island you are on!!!! 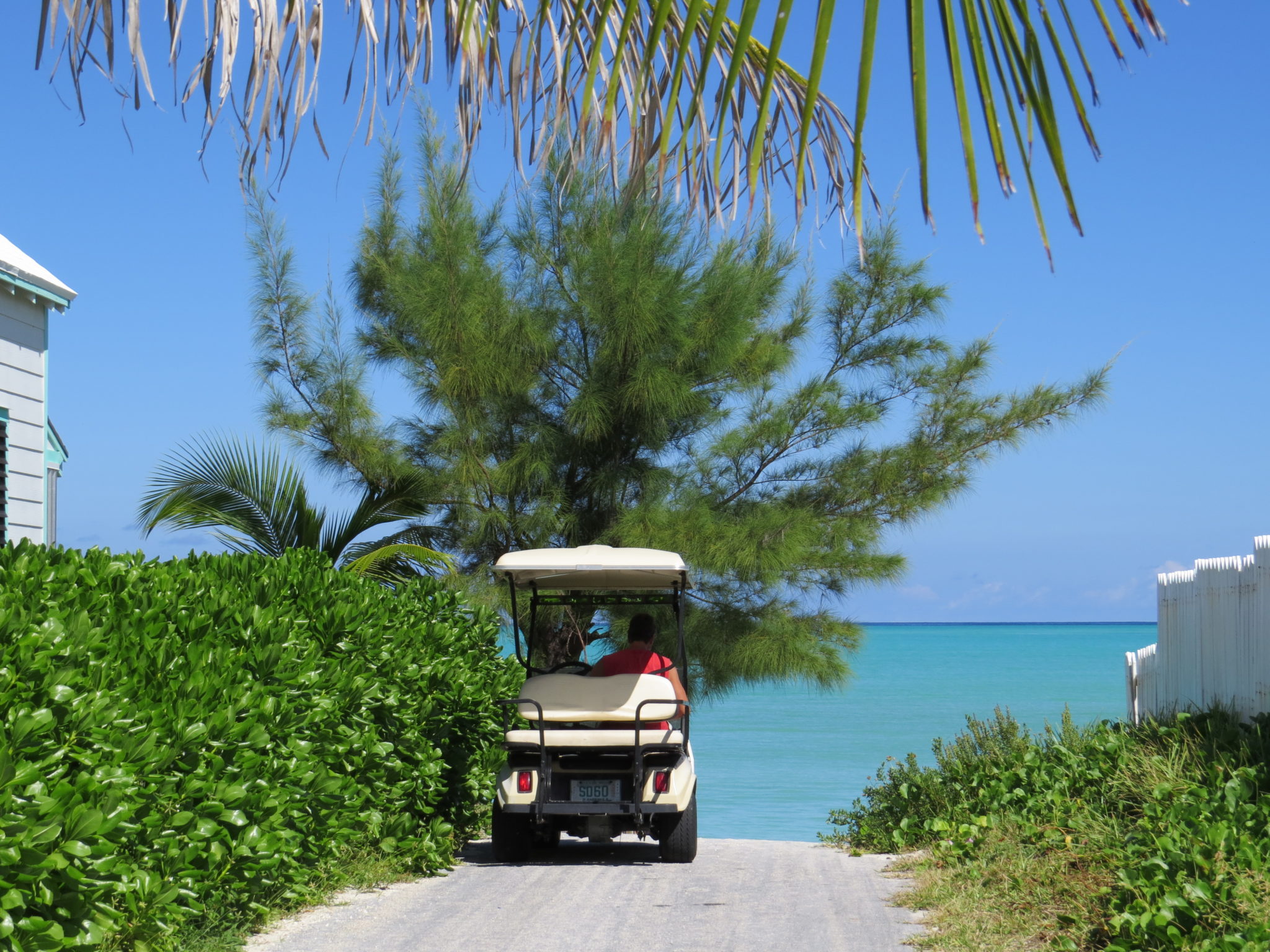 As you would expect of an island, plane or boat are the two methods to get there. The choice comes down to whether you take a private vessel or a commercial one. For the lowest rates, best schedules, and most options, commercial flights are your preferred choice. Coming by private plane or boat gives you the most convenience, but with some obvious added cost. Commercial ferries have the most difficult schedules without offering any real cost benefit. The best way to get to Eleuthera is commercial plane!