Located just one mile south of Tarpum Bay and a mere six miles north of Rock Sound International Airport (RSD), Winding Bay is a small residential community set around one of the most protected bays on the Atlantic side of the island. This makes it an ideal spot to vacation because the water inside the bay is generally quite calm even when strong winds blow from the east. This allows you to play, swim, kayak and paddleboard in the water without having to contend with the dangerous waves and violent rage that can occur on unprotected coastline.

Since Winding Bay is close to the two larger settlements of Tarpum Bay and Rock Sound you will benefit from its proximity to a number of stores, shops, bars, gas stations and restaurants. You'll still have to drive to reach these places since Winding Bay is quite isolated, save for the small number of neighboring beach homes, but you'll have a much shorter drive as compared to other parts of the island.

The larger selection of nearby restaurants can be found in Rock Sound, but the waterfront does have a few establishments plus a conch stand or two, and the local fishermen sell their catch each day in the early afternoon if ocean conditions allow.

Travelers choose Winding Bay for a variety of reasons. It's a small private community without many homes and offers good privacy. The beach is long and wide, and the bay is well protected. There are several good nearby beach options including Crossing Bluff and the series of beaches at Half Sound if you want a little variety. The bay itself connects into Half Sound for another option when kayaking. Good snorkeling can be found nearby. You'll also convenient access to fresh caught fish and one of the best, if not the best, groceries stores on the island along with a number of excellent waterside and beachfront restaurants. Finally, you are close to many of the southern attractions such as the Ocean Hole, Boiling Hole, Cathedral Cave and Lighthouse Beach. You really can't go wrong with selecting Winding Bay! 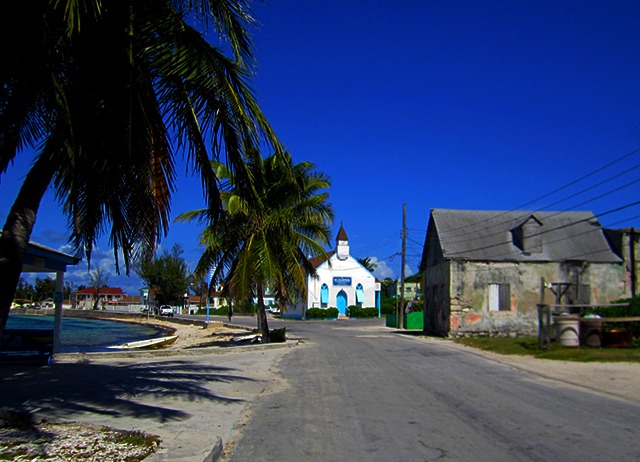 What Restaurants Are Near Winding Bay

Most of the good nearby restaurants can be found in Rock Sound (~6 miles south). There are a couple of waterfront restaurants and bars in Tarpum Bay, which is one mile due west although you'll be heading in a northerly fashion on Queen's Highway. Fresh fish and lobster can be purchased directly at the docks on the waterfront if you want to cook at home.

What Is There To Do On Eleuthera

Beaches - Eleuthera is home to 135 pristine beaches most of which you will have completely to yourself. You could do nothing other than explore beaches for your entire vacation. Pack a picnic. Grab some beverages. Go beach hunting. Make sure to purchase The Beach Book, Eleuthera, Bahamas edition before your trip so you can plan ahead. This travel guide is not available on the island.

Natural Attractions - there are quite a few Bahamian heritage sites worth visiting. These include, in no particular order.

Tours - consider taking a nature tour with one of the island tour guides. They can cater your tour specifically for your group. They offer a variety of land and sea options that include snorkeling  (The Eleuthera Snorkel Book)  deep sea fishing, scuba diving, scenic tours to the Schooner Cays, visits to pig island, spearfishing, paddle boarding, kayaking and much, much more.

Leon Levy Preserve - this 30-acre preserve has been designed as a research center for traditional bush medicine; a facility for the propagation of indigenous plants and trees; and an educational center focusing on the importance of native vegetation to the biodiversity of The Bahamas.

Day Trip to Harbour Island and Spanish Wells - consider exploring one or both of Eleuthera's two neighboring island to the north. Both are reached via water taxi. A golf cart can be rented at the dock so you can explore. They are both different and unique in their own way.

Lighthouse Beach - considered by many to be one of the best beaches in The World, Lighthouse Beach is at the southeastern tip of the island. A series of small beautiful cays form a set of giant steps leading out to sea from where the old lighthouse building still stands guard from its hilltop perch. Hike, relax, picnic, explore the natural ponds and visit the gap where two oceans collide.

Join our Facebook group and interact with property owners who have first hand knowledge about our beautiful islands. They are a valuable resource and can make your vacation planning a snap!