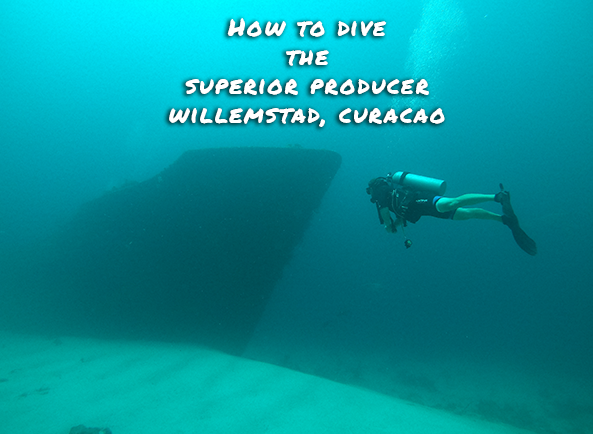 How to dive the Superior Producer, Willemstad, Curacao,

On my last dive trip to Curacao my buddy and I decided to venture back to the Superior Producer, a large wreck just west of the capital of Willemstad, that starts at around 65′ at the top and drops to 110′ in the sand. We both had dived this wreck several times before on previous trips, however, there is now a cruise ship port and dock fronting the dive site. The wreck is no longer easily accessible from shore. We knew that the wreck could still be reached, but finding information on the logistics of knowing when to dive, entering the cruise ship port, entering the water from and navigating to the wreck were nearly impossible to find online. We received several tips, but nothing concrete enough to allow us to form a plan. We were told that to dive the site we would need to hire a guide. Well, I wasn’t about to pay a guide to take me to a wreck that I know how to reach. But, I didn’t want to simply wing it. We gathered as much information as we could beforehand and then gathered a bit more at the dive site. Finding the wreck was a breeze. I’m creating this blog to aid other advanced divers on how to perform this dive without the need for a guide. I’m also recommending that if you aren’t familiar with compass navigation, entering the water from a tall platform, and managing your air consumption below 100′ that you consider hiring a guide. You’ll enjoy the wreck more and be able to dive it more safely. For the rest of you, here goes!

The first thing you have to do is find out the cruise ship schedule. If there are cruise ships in port then visitors are not allowed into the secured area and I wouldn’t recommend diving the Superior Producer without gaining access. It can be done, but it would be a very long swim and a considerably more difficult water entry. You’ll find the Mega Pier 2 just about two blocks west of the Renaissance Wind Creek Resort. The port you are going to dive off of is Mega Cruise Pier 2. Make sure there are no cruise ships scheduled to be in port on the day that you plan to dive. Click here for the Cruise Ship Schedule. You’ll need both Mega Pier and Mega Pier 2 to have no cruise ships in port. Pictured below is the secure area that you will drive through to enter and park. 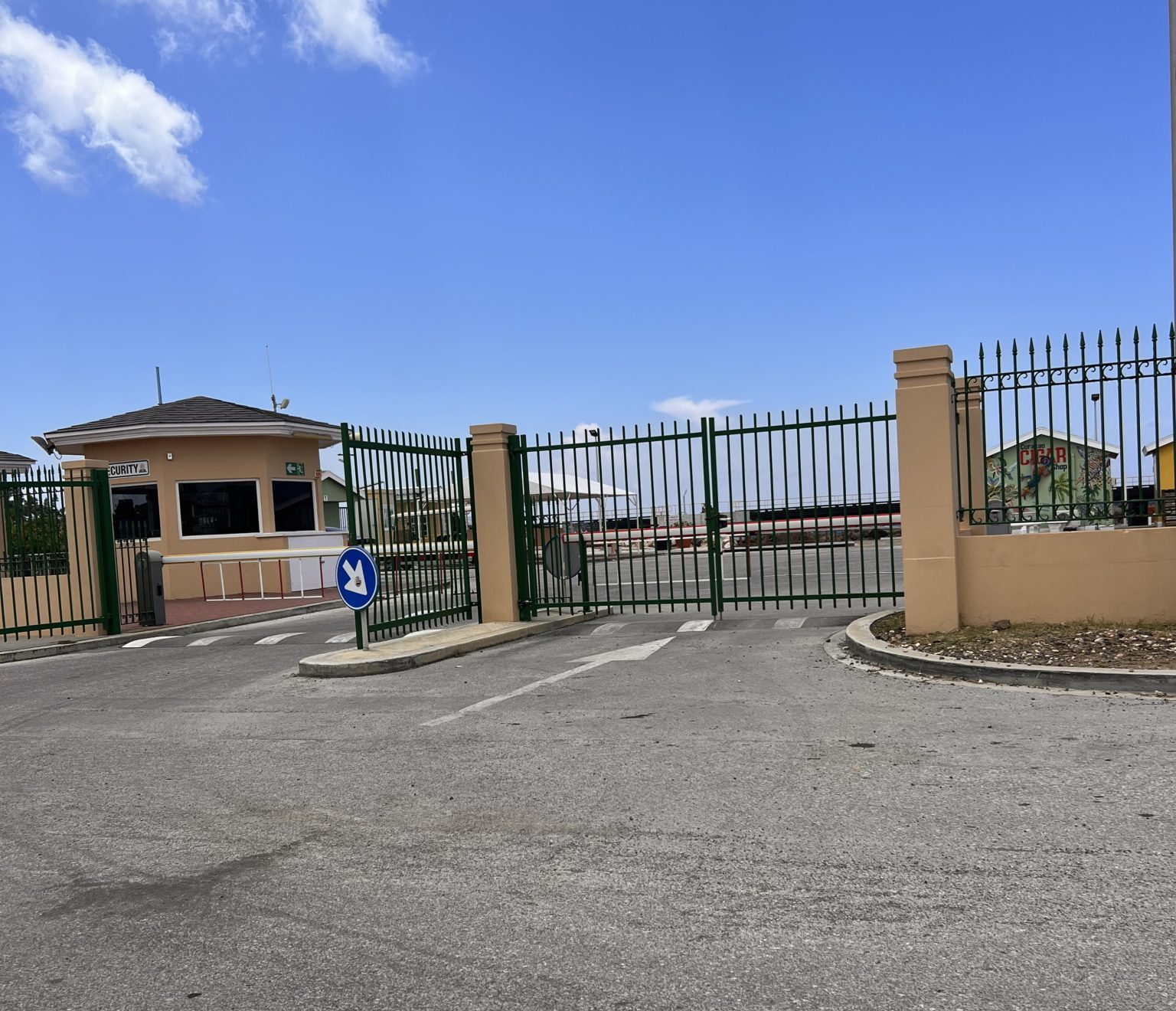 Gearing up to dive the Superior Producer

After driving through the gates you will park and go to the security guard where you will provide identification. The security guard will copy your information into their records to “check you in”. Be sure each diver has suitable picture id such as a passport or driver’s license. You’ll also need to check-out with security when you are leaving. Return to your car and head to the right towards the covered tent area pictured below. This picture is from the Mega Pier 2 dock looking back at the covered tent and parking area. 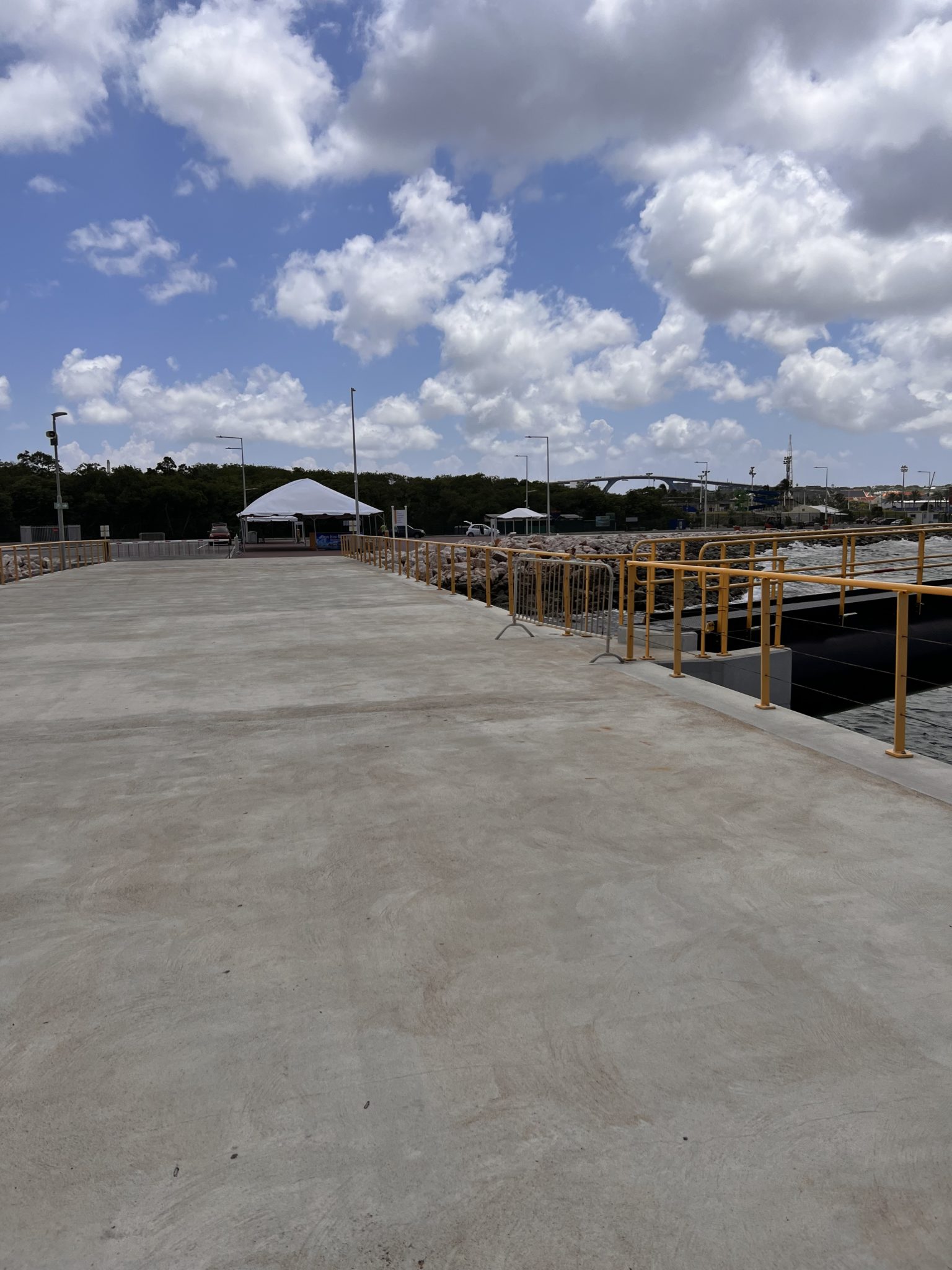 Either gear up at your vehicle or use the benches under the tents to don your gear. You are going to walk towards the end of the pier, but will go onto a lower platform on your right that can be used to giant stride into the ocean. There is also a short 6′ ladder at the end of the walkway if you prefer to step down into the water, however, be aware that the ladder is hared, thin and uncomfortable on the feet. You ARE going to use that ladder to get out of the water and back onto the dock, but I wouldn’t recommend using it to enter. It’s much easier to giant stride off of the side of the platform. Pictured below is the lower walkway with it’s ladder at the end. 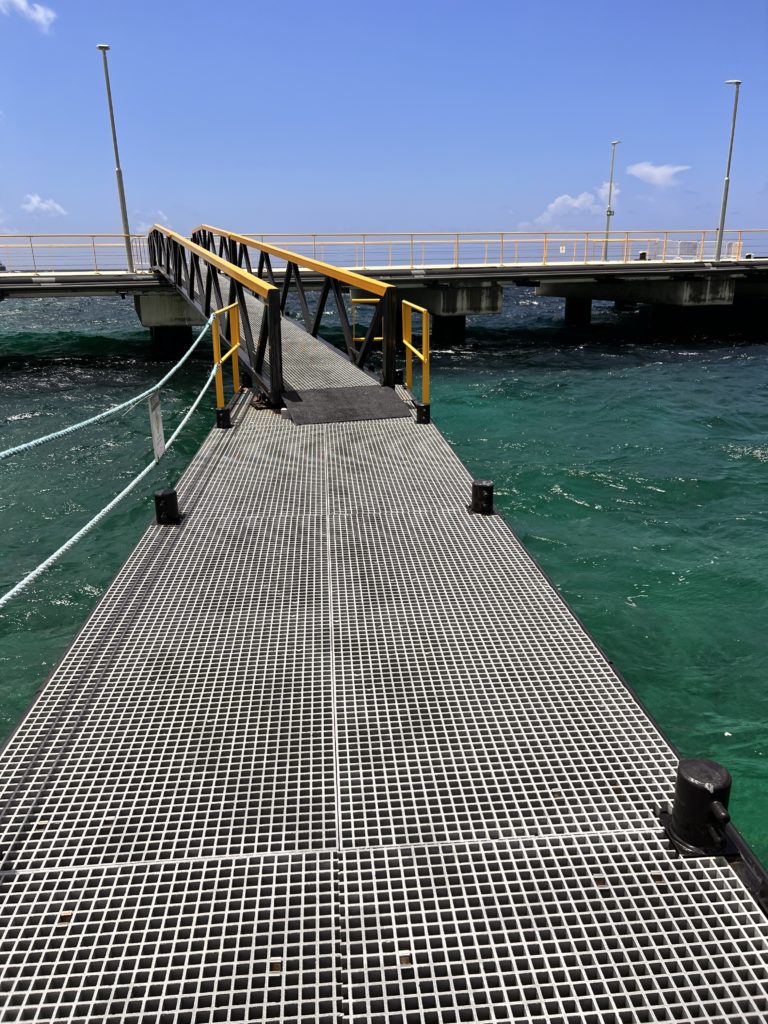 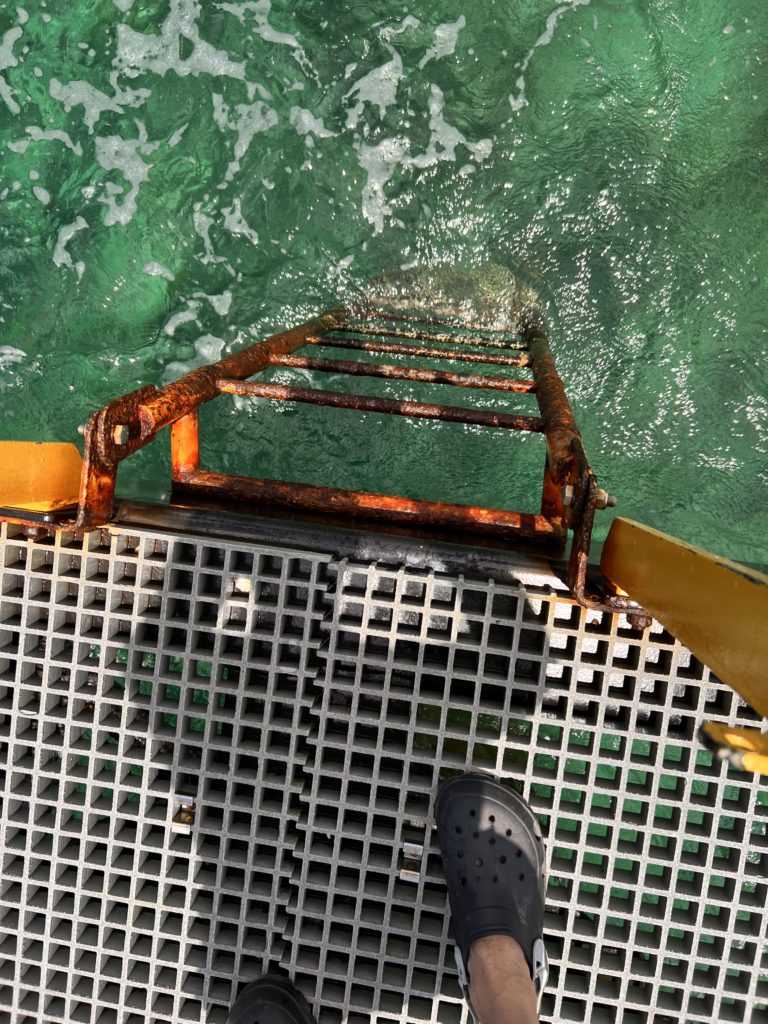 Ladder at end of walkway that is used to exit water to return to Mega Pier 2.

I took a few photos from the end of the Mega Pier 2 dock to you understand in which direction you are going to swim. There happened to be a few divers already in the water when we were there so we took a compass heading from land towards their bubbles. In general, you are going to swim, either above or below depending on surface conditions, towards the last stanchion on the left side of the Mega Pier 2. You will do this by swimming under that portion of the dock. Just remember – front left all the way at the end from where you enter the water. 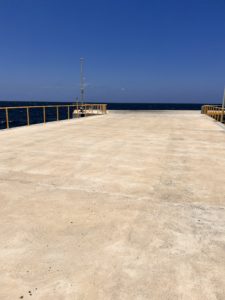 Entry walkway with ladder is towards end to your right. You will swim forward and left. 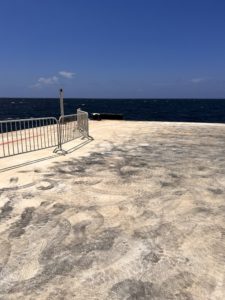 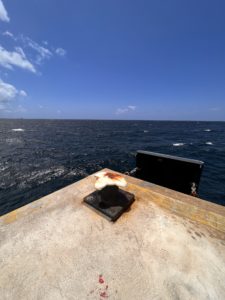 This is roughly the direction you will swim from the front left of the pier.

I took a compass heading while on land and it was roughly 170 degrees towards the direction of the wreck. In reality, though, once we reached the front left post of the dock we didn’t even bother to use the compass as the ship was quite visible and less than 100′ away. Using Google Earth towards the GPS coordinates I set to check the compass heading, it looks like anything between 150 degrees and 180 degrees will be good to use to navigate, but given the clarity of the water you will likely not need to use a compass at all. I recorded the following GPS coordinates also using Google Earth, but these are just estimates as I didn’t have a GPS device with me. Superior Producer GPS coordinates: 12° 6.292’N, 68° 56.653’W.

Below are some photos and some videos of the wreck. As I mentioned already, the top of the wreck starts around 65′ and you are below 100′ in the sand. The wreck hull can be penetrated as well as the wheelhouse and one other deck above the wheelhouse. The wreck is covered in fire coral so make sure to wear good protective neoprene if you are going to penetrate as it is really easy to brush up against that stuff. The day we visited there were quite a few large Tarpon and lots of other small tropicals. Lots of soft and hard corals grow all over the wreck. Since the wreck is large and intact it’s easy to navigate. You’ll likely start on the port side at the stern and then make your way forward around the bow and onto its starboard side. Just watch your bottom time and air consumption. It’s really easy to slip into deco especially if you drop down into the hull for even a short period of time. If you aren’t familiar with deco diving then stay towards the upper parts of the wreck and limit any hull penetrations. 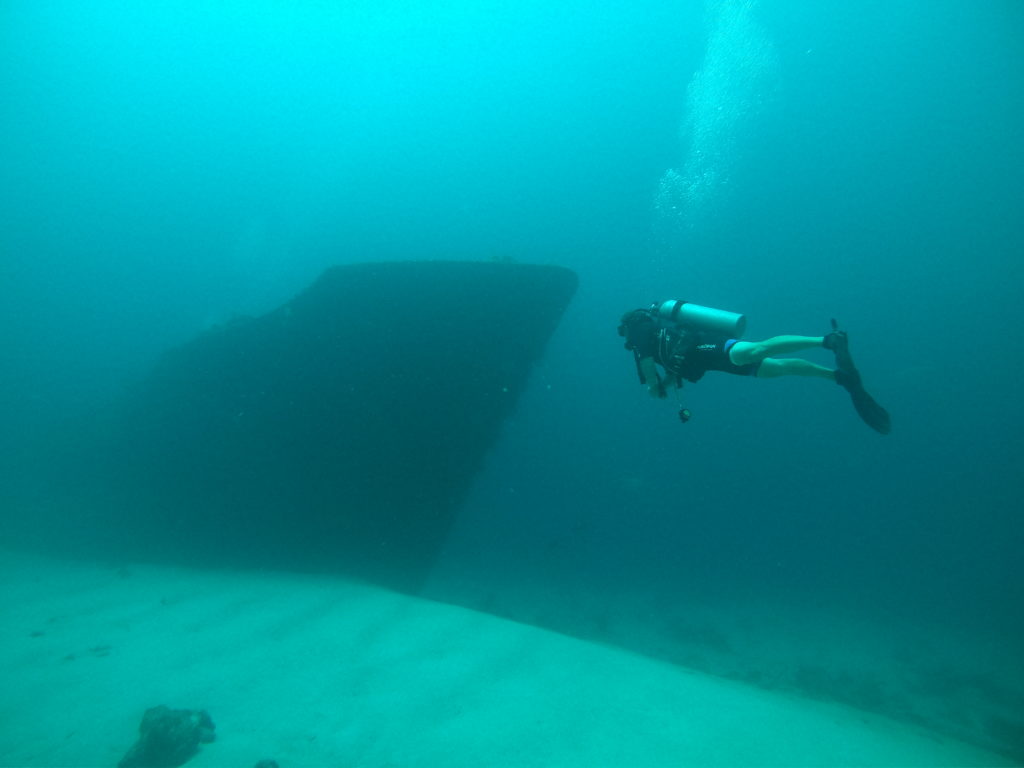 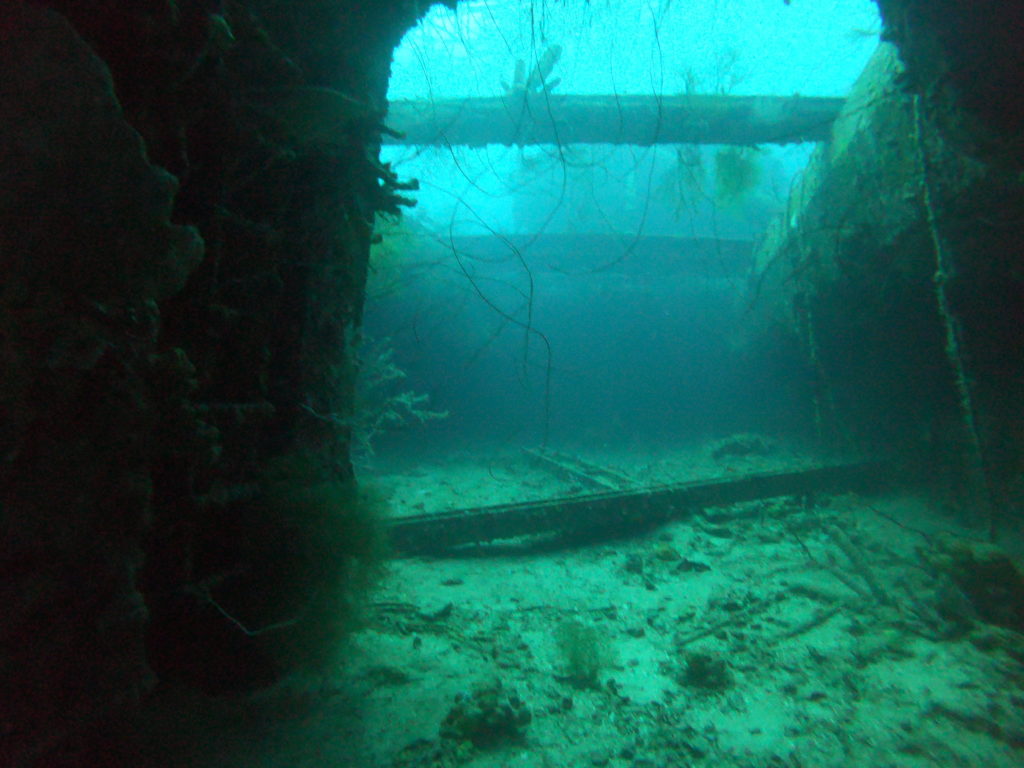 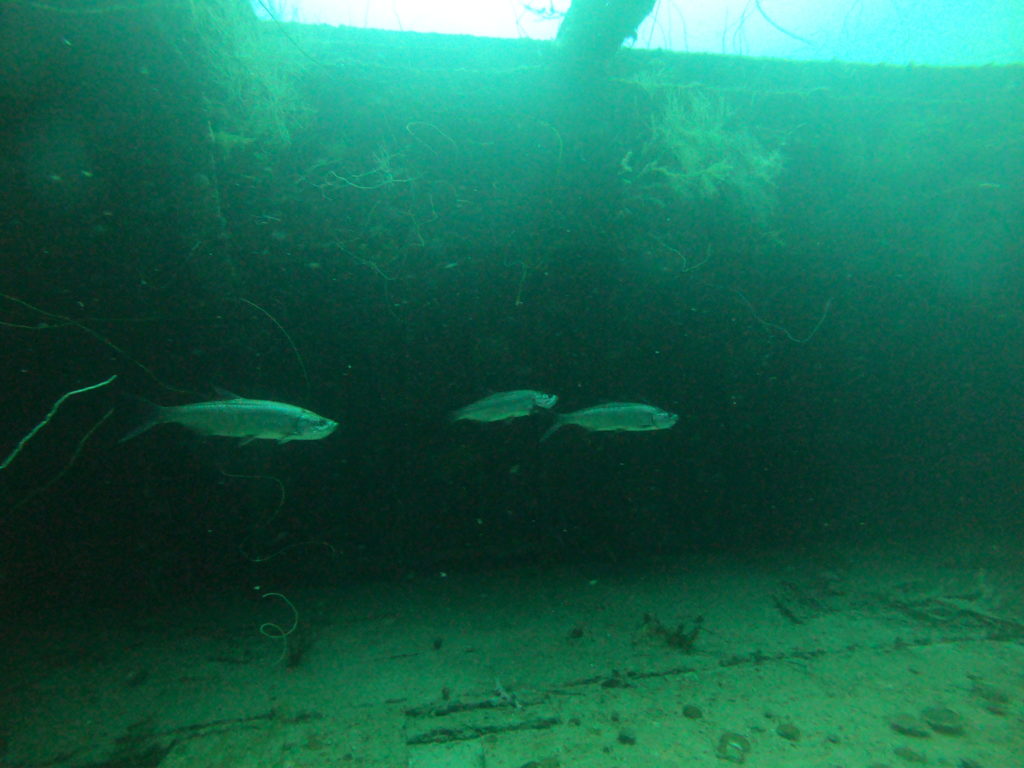 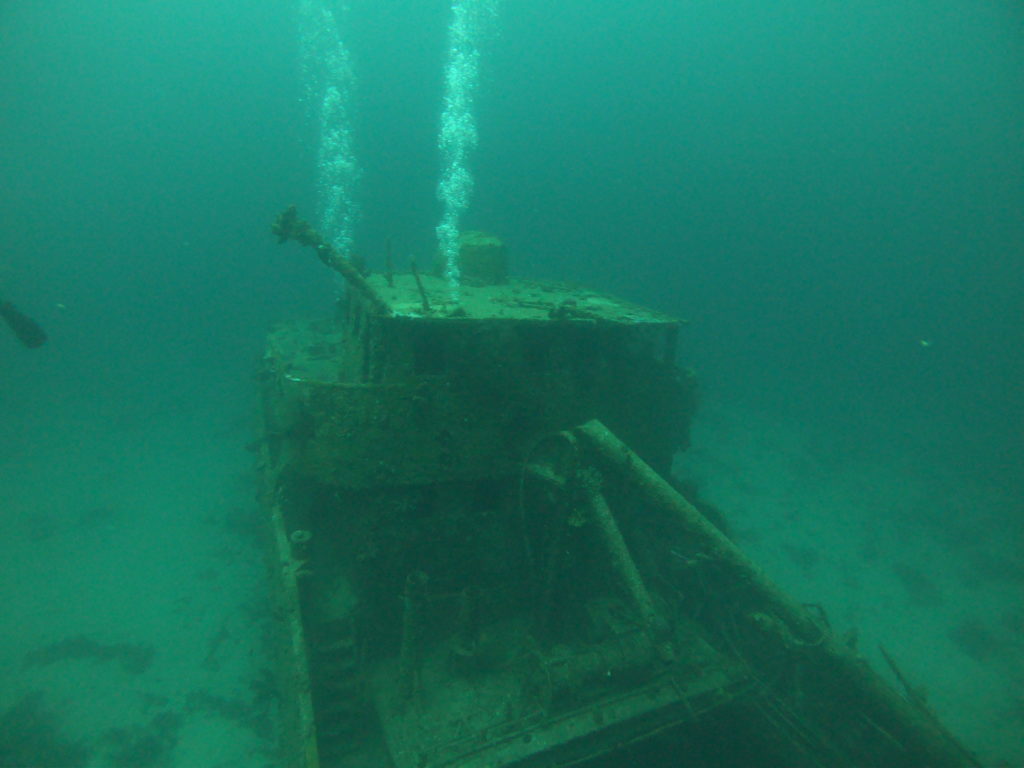 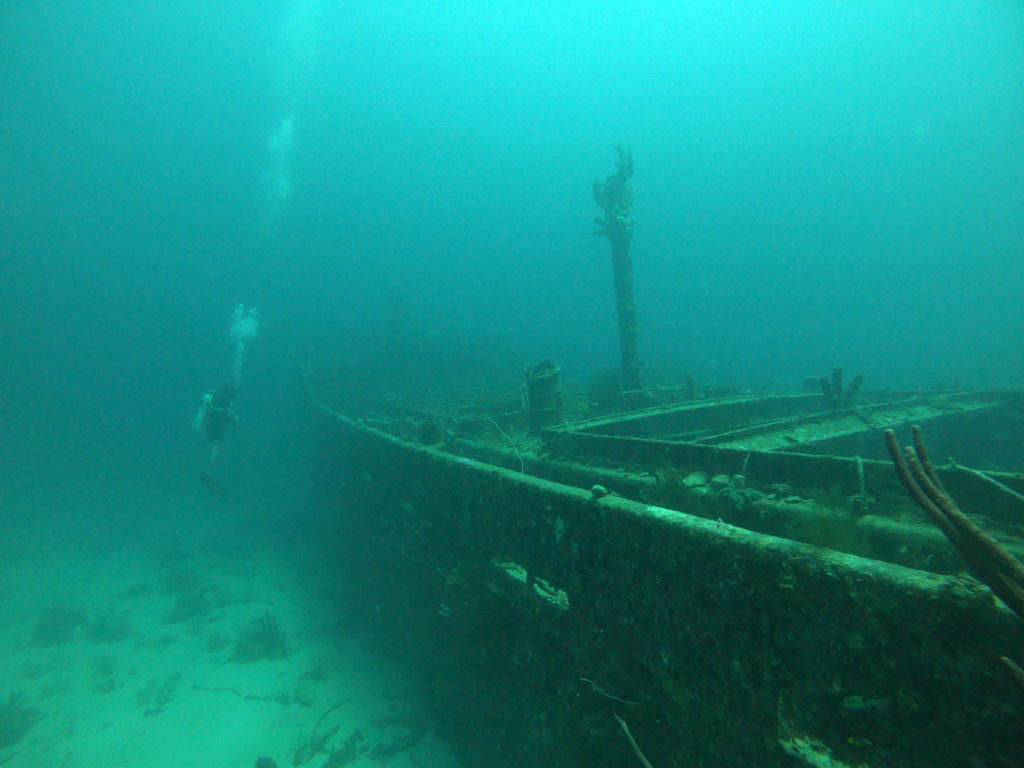 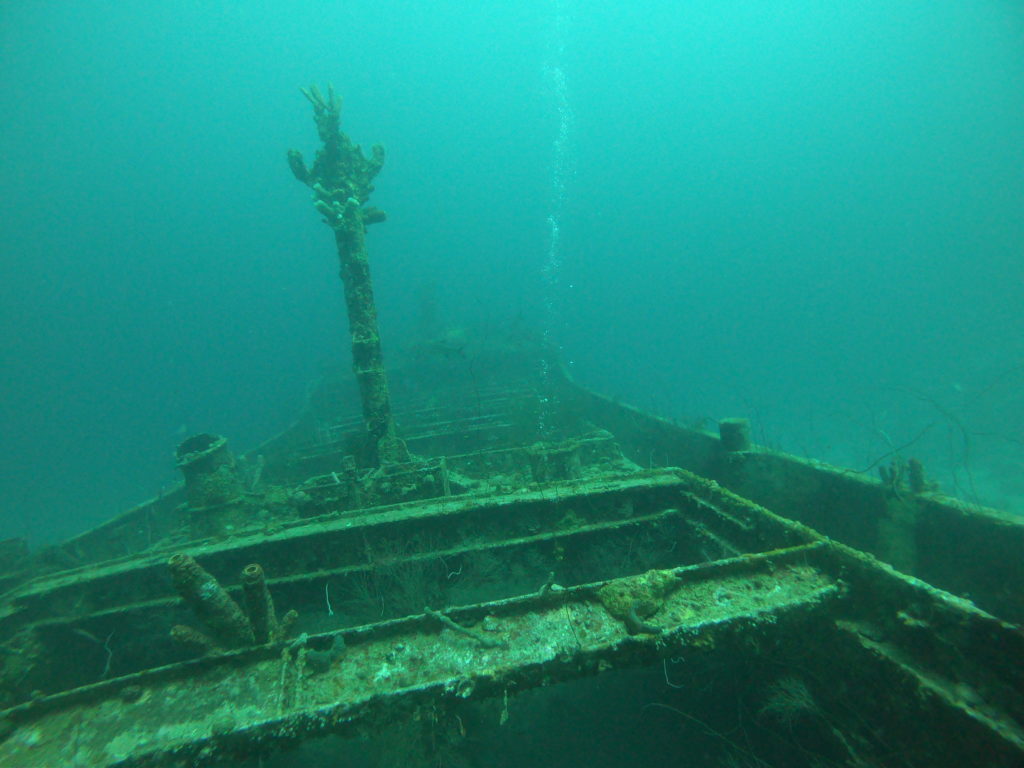 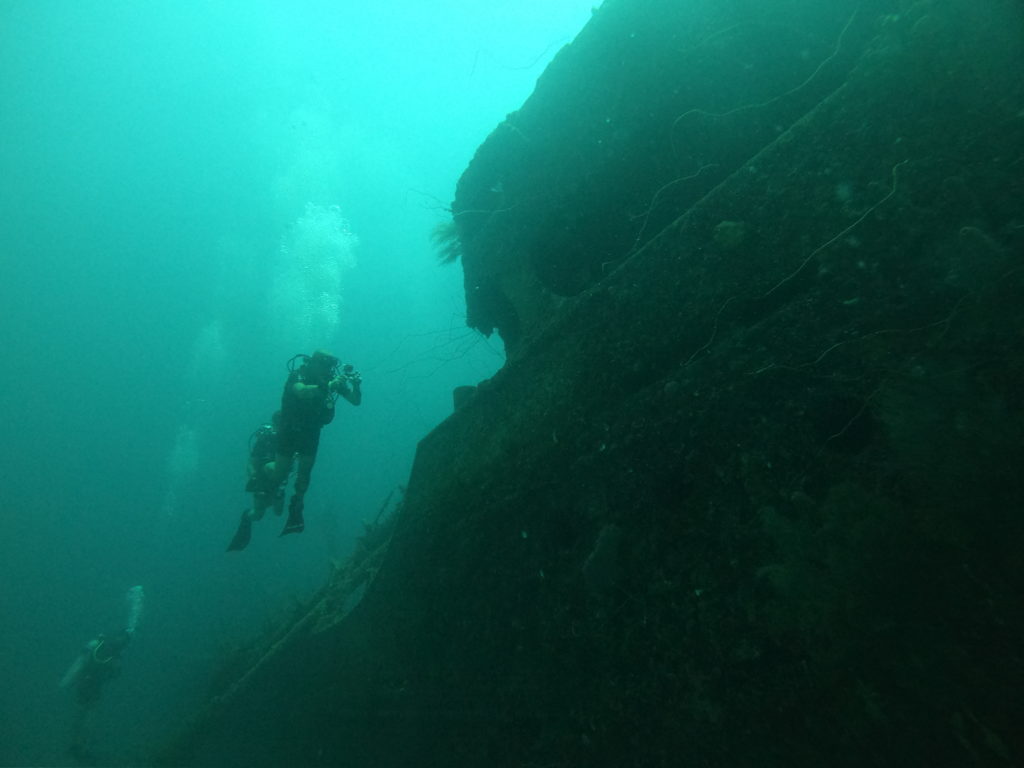 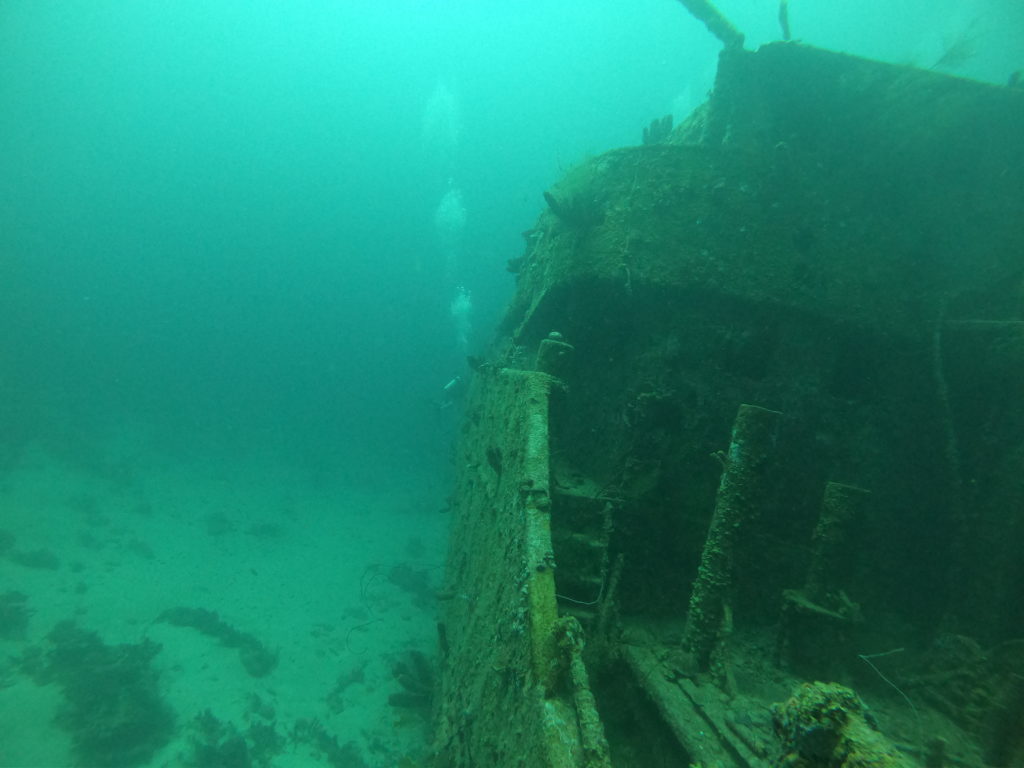 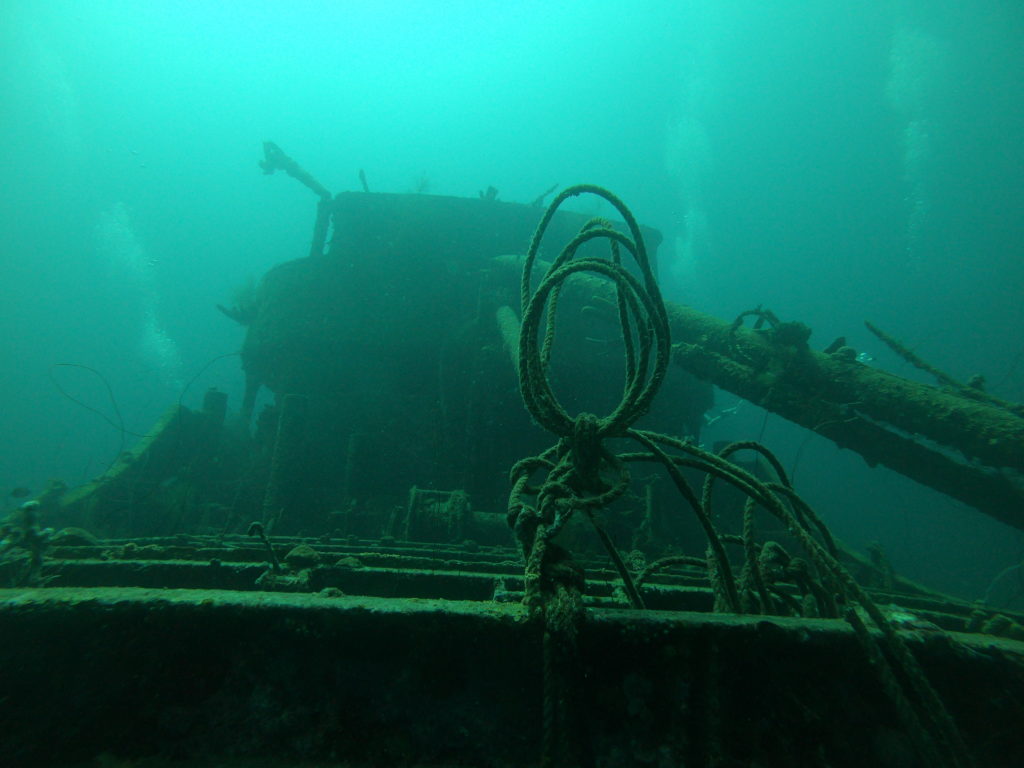 Over the hull looking towards wheelhouse

Port side of the Superior Producer

Inside hull of Superior Producer

Above wreck of Superior Producer

To return back to the dock swim back to the stern of the boat and go back the way you came following the wall back to that dock post. You can surface there or go back towards the ladder and do your safety stop approximately where you entered the water from the walkway. Climb up the ladder at the end of the walkway and you’re done!

I own a villa in Coral Estate that I rent out to vacationers. If you ever want to visit this enchanting island and need a place to stay then please consider Villa 19, our 3 bedroom 2.5 bath vacation home towards the west end of the island and only 30 minutes from the Superior Producer. Here is a link to our website. 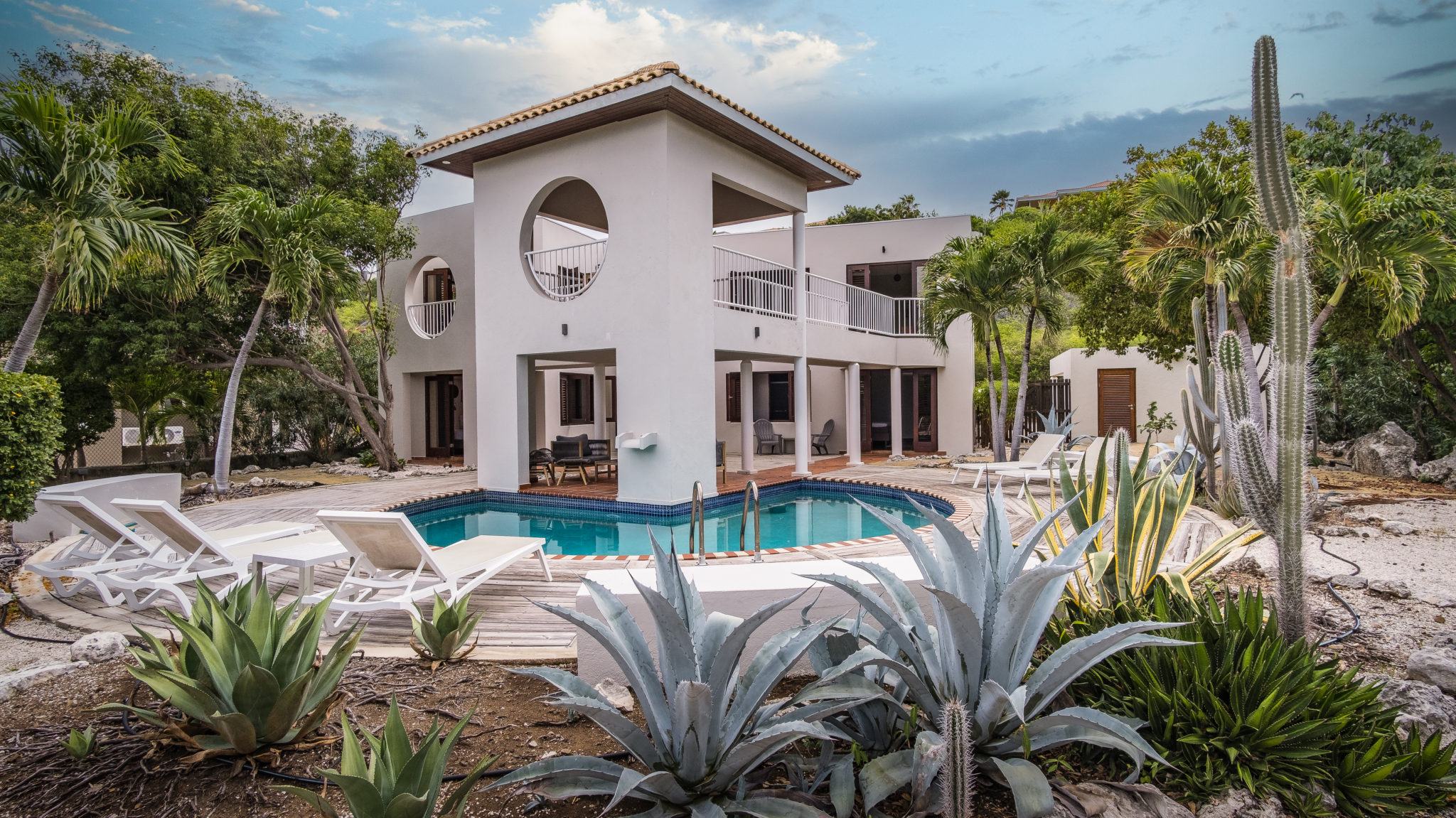